The Chronicles of Cedric: Guardian Of The Citadel 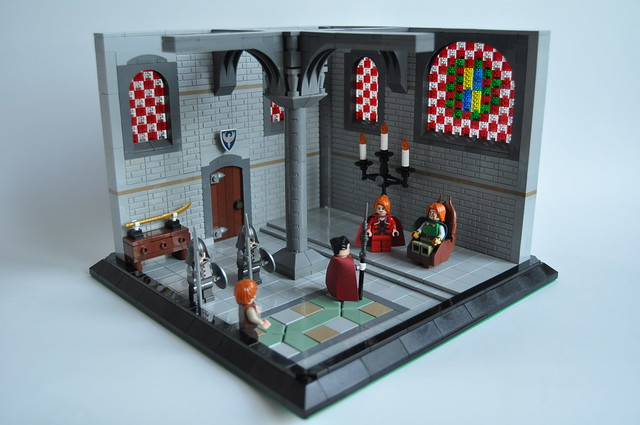 He always felt a tad bit annoyed when he left the halls of the Obsidian Citadel. THe grand city was so
much more advanced and prosperous than the rest of Sushold. But he knew that the mission he
carried was important and he was just a small cog in a massive machine that made sure the realms of
men would not fall into chaos. At least, that is what master Maeral always said, but he was a
dithering fool, now that Cedric thought about it. The sound of his chuckle scared away a sparrow in
the underbrush next to the road.
The smell of the castle met him earlier than the sight or sound of it. He just wished he did not have
to stop at that damned castle on his way to his real destination. The cooking fires and refuse that
always accompanied such a large castle.
Gods, he missed the Citadel.
Now that he was closer the colours of lord Birchwood were visible on the flagpoles. Cedric frowned,
thinking about the last time they met. He was appalled by the lack of respect the lord showed
Cedric’s masters. Birchwood saw himself as equal to them which was expected from a man who
thought himself king. The lands belonging to Birchwood were not that large to begin with, let alone
his regard within the Citadel.
The doors croaked as he entered the great hall, though what was supposed to be great about it,
Cedric could not really tell. He approached lord Birchwood who was seated in his large chair, you
could hardly call it a throne to be honest. Cedric bowed his head to the lord and then to his Lady who
stood beside her husband. From the corner of his eyes a figure moved and when he looked he saw a
boy, clothed in fine livery, probably the son of the lord.
“It has been a while since a guard of the council stood before me. The council must have been busy
of late,” lord Birchwood stated. He looked pensively at Cedric for a few moments. “Have we met
before?”
“I am Cedric of Dayne, my lord.”
“Cedric? You’ve changed since the last time we met. What tidings do you bring from the council?”
Cedric paused and thought how he should bring this news as he knew lord Birchwood would not see
it as news at all.
“The Earl of Ludingen has passed away,” he finally said.
“Yes, I’ve heard, what of it?”
“The death of the Earl of Ludingen was not considered a natural death, nor was the death of his son.”
Cedric saw lord Birchwood frown but decided to press on.
“The council is investigating the matters, but Ludingen cannot go without a ruler which means that
his second son, Rickard of Ludingen, will be the new earl. It is also a public secret that you, lord, and
now Earl Rickard have had a troubled history.”
‘Pfff, is that all? I don’t think that Rickard still holds a grudge over something that happened a long
time ago.’
‘His recent statements suggest otherwise, lord, if you just....’
‘This was before he was made Earl,’ Lord Birchwood interrupted and waved his hand as if trying to
swat a fly. “Rising to a position of ruling changes most men.”
“Have you met with the Earl recently, lord?” Cedric said, trying to hide the annoyance in his voice.
“Tell the council that there is no need for concern,” Lord Birchwood replied and rose from his seat,
dismissing Cedric. “That will be all.”
Cedric paused and looked at the lord, before finally bowing his head and turning away. He heard his
footsteps echo through the empty hall and shook his head to the stubbornness of the nobility.
Omhoog 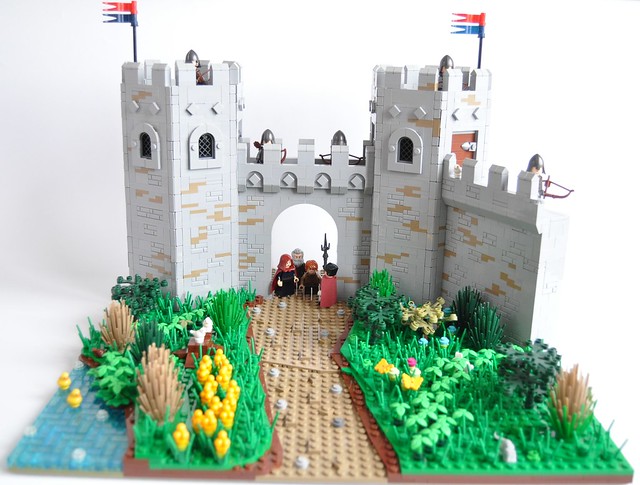 Cedric made his way to the gate where he heard the cooing of the pigeons. The message was short:
‘Response was as expected. The next stop is Green Lake.’ A pensive gaze followed the pigeon as it
took flight after he absentmindedly gave coins to the servant near the dovecote. His brooding was
disturbed by the sound of small footsteps running closer and he turned around. The small boy with
the fine livery came running to him as the Lady of the castle hurried after him. Cedric frowned as the
boy stood in front of him and looked at him with such a malicious gaze he had seldomly seen.
“Kevin of Birchwood, why are you troubling this man?” the Lady asked, putting her hand on Kevin’s
shoulder. She seemed a little out of breath and Kevin shook her hand off his shoulder. The boy could
be no older than ten years old, yet his disdain for common people was very evident in his manners.
“Does your father know that you are here?” the Lady asked as she gave him a stern look.
“That is no way to talk to a lord!” Kevin hissed but did not take his eyes off Cedric. “He was
disrespectful to my father.”
“And what if I was, little one?” Cedric asked and took a step forward. He had to give it to lord
Birchwood’s heir, he had courage. Kevin hesitated for a few moments and opened his mouth to reply
but could not seem to find the right words. With a red face he stormed off and seemed to curse at
nothing in particular. The Lady sighed and looked at Kevin walking away.
“I hope he is not always that stubborn,” Cedric said to the Lady.
“Well, luckily I’ve had plenty of experience with stubborn boys,” she replied and gave Cedric a
knowing look. Cedric felt his cheeks flush red and turned around, hoping the Lady did not see his
embarrassment.
“Now, now, it seems that your manners have since escaped you Cedric, that is no way to treat a
Lady.”
He stopped and turned only to see his former nanny having a mischievous smile on her lips. He
chuckled and took an exaggerated, deep and reverent bow.
“My apologies, m’Lady.”
“And here I thought becoming a guard of the Obsidian Citadel would beat the mischief out of you,”
she replied amused and took his arm to help him back up. They started walking towards the gate,
arm in arm.
“I’m afraid not even the Gods will be able to beat that out of me.”
They walked in silence for a few moments, but it was not an awkward nor painful one. Both of their
memories traveled back to the time when Cedric was still young and Lady Birchwood was not yet a
Lady nor married.
“It was good to see you Cedric, it is a shame you cannot stay any longer,” the Lady said as she let go
of Cedric’s arm when they reached the gate.
“Alas, my business takes me elsewhere, but perhaps another time,” he replied and smiled
reassuringly. A falcon suddenly dropped from the sky just outside the gate and flew away moments
later, clutching its prey in its sharp talons. Cedric frowned and wondered what sort of omen this was.
If it was a message from the Gods relaying something to him. Or maybe it was just a coincidence. Still
the picture of that bird portrayed on a shield worried him.
“Cedric? What is the matter?”
The Lady looked at him with worried eyes.
“It… It is nothing, just a feeling,” he replied vaguely. He opened his mouth to speak, but did not. The
information he had was worrying and the fact he had spoken to Lord Birchwood was already more
interference from the Council in politics than they had ever done. But still… He cared for these
people. For the Lady. Even though he had not lived here for over a decade, it was still the place
where he grew up. Where he had felt at home.
“Cedric?” the Lady asked, her hands clutched in front of her chest.
“Do not trust the Black Falcons,” he muttered softly and saw her eyes widen, understanding what he
meant. He rested his hand on her shoulder and nodded, his eyes grim and serious before he made
his way out of the gate.
Omhoog 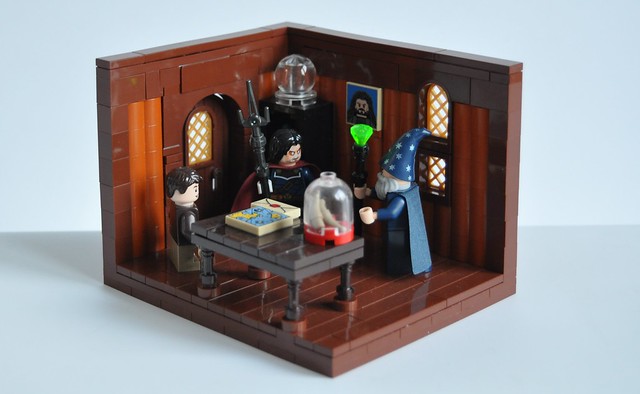 Pippin’s daydreaming gaze was interrupted by the fluttering sounds of the pigeon’s wings. He hurried
to the bird and untied the little leather canister holding the message, which was not easy as
apparently the pigeon did not like him meddling about. After the bird knocked over several
important books and a, fortunately unlit, candle he was finally able to get the message from this
dreadful bird. Pippin smiled and let his short legs hurry outside of the room. Avoiding several mages,
magisters and guards he came to a halt in front of a door, straightening his jacket and getting his
breath back before he knocked on the door.
“Yes? Who is it?” an older voice asks. Pippin opened the door and walked in before freezing in his
tracks. The cold intense eyes of Captain of the Guard Filius Stone looked at him. Most of the guards
endured Pippin well enough, he is just a messenger boy, but Stone had always scared him.
“What is it boy?” the kind yet urgent voice of Master Vildrox asked the boy. Pippin handed the mage
the message without taking his eyes off Captain Stone. Master Vildrox opened the scrap of paper and
read the content out loud, but Pippin’s interest was already piqued by a large green crystal of some
sort that seems to have been made of metal. But that should not be possible. Crystal is its own
material and cannot be made of crystal. Can it? Pippin stares at it as he ponders the answers. His
studies were falling behind a bit as there was always something in some of the rooms that was much
more important. The two men in the room were discussing the contents of the message but he was
hardly paying attention.
“You do not seriously think he will lay claim to Birchwood using that ancient law?”
“Why else would he ask about it?”
“That fool will be the death of us… The kingdoms are not fit for another war, not after the plague.”
“Would that not seem like the perfect time to strike?” Master Vildrox asked and looked at Captain
Stone. Pippin was wondering if he could use the metal crystal to make a staff and use it to fly. Can
you imagine? Swooshing over the citadel with the sparkling stone on top of a dark wood staff?
“Someone needs to keep an eye on them,” the old mage mutters as he looks outside of the window
towards the far off restless lands.
“I’ll send the boy to prepare a horse for me. I will trust no-one else for this task,” Captain Stone said,
agreeing with Master Vildrox.
“Pippin!”
The young boy looked puzzled as he heard his name, waking up from the daydream of soaring
through the sky holding a magical staff.
“Huh, what? I mean, Yes Master?”
“Go to the stables and let them prepare a horse for Captain Stone,” the mage answered patiently.
“Yes, of course! Right away sir!”
His short legs hurried away again.
“I do not care who his parents are, the boy needs to pay attention to be a page in the Citadel. His
dreaming needs to stop,” Captain Stone said with annoyance in his voice as he looked at Pippin, just
before the boy left the room.
“Sometimes dreaming is all we have, Filius,” the old mage replied absent-mindedly, as he looked
outside the window.
Omhoog

The Chronicles of Cedric-Guardian Of The Citadel.pdf
(256.39 KiB) 10 keer gedownload

Terug naar “The Chronicles of Ara”